I’m fascinated with the idea of automating myself out of a job.

Throughout my career, I’ve done a lot of server maintenance. I’ve seen firsthand what happens when you don’t update often. I know how painful it is to do multiple “catch-up” upgrades for older software.

Over the past five years, open source containerization has dominated the industry, and there are no signs of slowing down.

We’re at the point now that we’ve abstracted most of the “sharp edges” around application development. Today, applications are less reliant on the underlying hardware. Kubernetes is the abstraction layer that helps applications just work™

That got me thinking about the next evolution for cloud-native practitioners.

I posted a silly question on Twitter about “turning on all the automation.”

Tell me what I'm missing:

How many upgrades will it survive? 😁

In this proposal, the cluster would self-upgrade, and GitOps would update applications, including itself. High-level overview:

There’s so much that could go wrong with this. I should remind everyone that this is for fun and NOT production. Upgrades could conflict, packages could break dependencies, releases could be tainted, etc.

I wanted to try this using local VMs. So I spun up 3 Ubuntu VMs on VMware Workstation. It seems like cheating to use a cloud provider for auto-patching.

I did it and it **kinda** works. The biggest problem I had is flux auto-updating to the wrong tag.

The cluster auto-upgraded to 1.19.1 without me touching it. Same for the kernel.

Once the infrastructure was stable-ish and auto-updating, I launched a website: isitstillrunning.com, to track the cluster’s progress. A script on the control plane would scrape the node and commit the data back to GitHub daily (which then triggers a website build).

The cluster ran for eight months and survived two major releases and a handful of patch releases! 🎉

However, I made some mistakes when configuring kubespray, and I had to redo the entire project in June of 2021 after everything broke. It wasn’t only kubespray; it was also:

In mid-February of 2021, central Texas lost power for a week, impacting millions. I was without power and water for five days which was longer than the cluster’s DHCP leases. Each node in the cluster received a new IP. 🤦

Why? Rookie mistake(s). My demo local cluster used DHCP and lost their leases when I lost power for a week in Texas.

It get's worse; I originally created two control-plane nodes with local etcd. This means if I lose one etcd member, I lose quorum 🤦‍♂️ pic.twitter.com/kIp2puddcE

Below is the final screen grab before I took the cluster offline. The gap on the right side are when the script fails due to the lack of a working Kubernetes cluster. 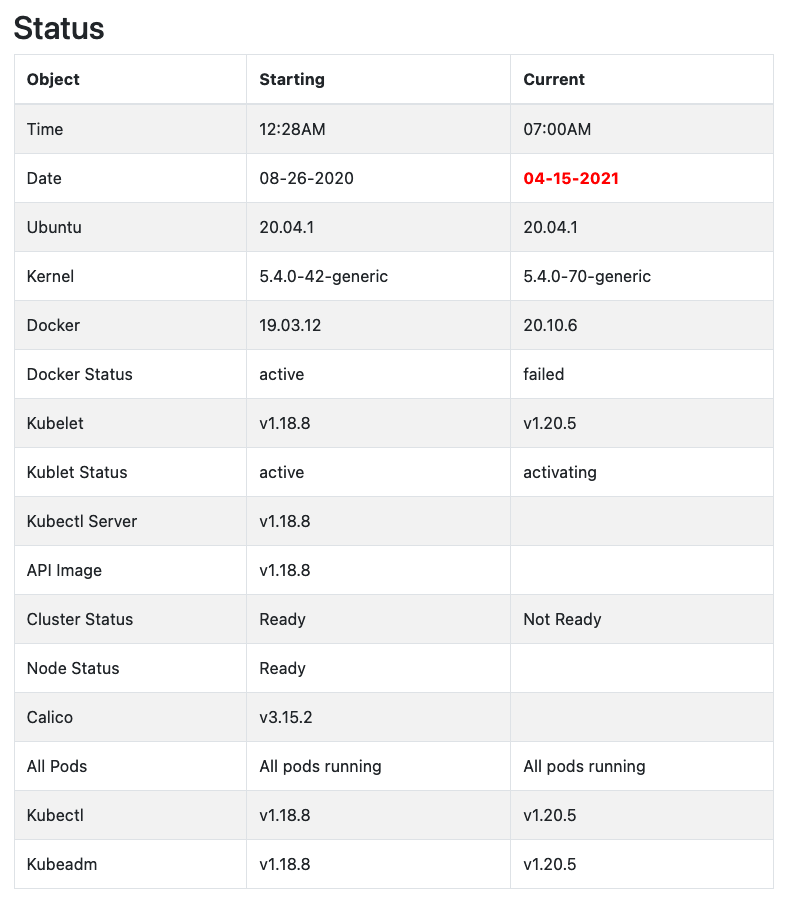 We can rebuild it#

With a fresh slate, I automated most of what I did. Automating the build helps for rebuilding after future failures. A couple of changes and “lessons learned” that I’m going to add:

It would have been great to have Calico auto-update based on image tags or repositories, but it became more complex than it was worth for this project. Let me know if you have thoughts on how to handle the CNI better!

I wrote my own Ansible playbooks because I want know my cluster’s exact configuration. I also tried to make the playbook easy to read and update. By leveraging Ansible, my future changes and maintenance will be a lot easier.

The Ansible scripts work on any OS, but for this project, I’m using Ubuntu 20.04 LTS VMs.

I’m using Ubuntu for (free) Canonical Livepatch Service which I use to keep our kernel up to date.

Let’s avoid having a natural disaster turn into a technical one. This depends on how your network is configured. I use a router from Unifi and can set static IPs through the UI.

I broke the playbooks into phases that I thought could be reusable chunks. For example, there’s a playbook for general bootstrap and another for specific version pinning. Each playbook acts as a foundation to the next layer.

The playbooks are publicly available in the kubeleak repository on GitHub.

The following commands are tested on Ubuntu 20.04 only.

Update inventory.yaml by replacing the IP addresses with your node IPs 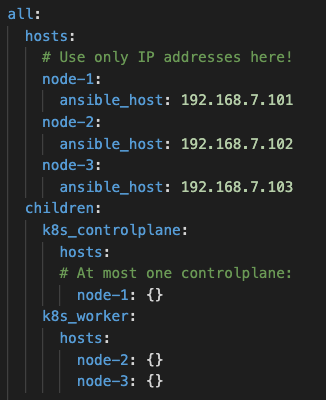 Also replace the remote_user with the USER on the remote VMs.

Once finished, test the connections by running:

If it all comes back successful, you’re ready to go! 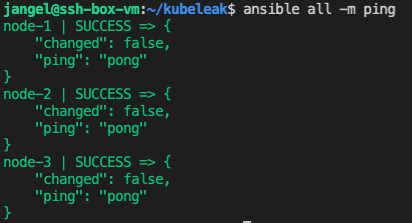 Playbook-1: Update everything and snapshot#

If interested in what’s installed, look at playbooks/update.yaml. I borrowed much of this playbook from linuxsysadmins.com

The first playbook gets us to a “clean slate” by running updates on all the machines and installing the necessary repos / components.

The -K forces Ansible to ask you to type the password for sudo, “the BECOME password.” An alternative would be to add your user to the WHEEL file so it never prompts for a password.

Once complete, let’s take a snapshot of the VMs to revert at any point. This is also helpful if I ever want to create a node template.

I’m going to install one minor version to see if the automation and updates work. By default, the script takes the value from inventory.yaml.

You can also look up and specify a version of k8s.

Be careful running this on existing clusters. Running a mix-matched version of utilities is not recommended. Always ensure your tools stay within the version skew.

I created a kubeadm template which acts as the main driving configuration for Kubernetes. If you open templates/kubeadm-config.j2 up, you can see there are a lot of parameters for Kubernetes.

Kubeadm doesn’t support changing any parameters while upgrading, so getting right from the start is essential.

In a few minutes, you’ll have a cluster!

Log in to the control plane node as your user.

Prometheus is included in my GitOps stack; let’s make sure it can scrape etcd by creating the authentication certificate as a secret.

Before setting up Flux, let’s create a GitHub Token to use. A token is needed for read/write access to your GitOps repo. The documentation indicates the token needs full repo access.

Next export the information for flux CLI to use.

The easiest way to do that is using their flux CLI.

flux bootstrap is supposed to be idempotent and either create or pull a repo, depending on its existence. Once set up, the CLI can do more. Check out the official docs!

I did a TON of work to automate my flux deployments. It could almost be another post. If you’re interested in looking at the repo, click here.

The last and final playbook. It’s a simple one to install unattended-upgrades for the OS.

If you want to test it out, you can; however, keep in mind that you’re upgrading everything.

Since kubectl, kubeadm, kubelet, and docker are automatically updated, I wrote a crude script to try to get kubeadm to upgrade the control plane by using the new versions. As root, ad the following contents to /etc/upgrade-node.sh

As your user, add the following contents to /etc/status-node.sh

Lastly, I enabled LivePatch to auto-patch the kernel.

I’m glad to be up and running. Building the automation took me longer, but I hope it opens up for future fast iterations. I’m not entirely sure my Flux configuration is optimal. I might consider trying out Argo, an alternative GitOps engine.

There’s a lot of work above that could have been automated, and I might; when I revisit this.

My next steps are:

As issues pop up with the cluster, I’ll update this post! Cheers!